Use of poisoned bait in the countryside is one of the main threats to biodiversity in Spain. Poison is used to kill animals considered to be harmful to certain activities, mainly hunting, livestock farming and agriculture. It affects pets like dogs and cats and is also used for settling feuds between private individuals, as a way of exacting revenge.

The poisoned-bait method of hunting animals involves steeping a food item in a toxic substance, normally phytosanitary products like insecticides, rodenticides, fungicides, herbicides or molluscicides (snail and slug pellets). The prepared bait is left in a spot accessible to the target animals though it might well be eaten by any other, thereby potentially affecting many other animals beside the target species.

Poisoning is therefore a large-scale, non-selective and violent method that has a huge knock-on effect on non-target species, including threatened species and pets; it may even pose a risk to human health. Illegal poison use is one of the main causes of death in some of Europe’s most threatened species, such as the Spanish Imperial Eagle, Bearded Vulture, Red Kite or Egyptian Vulture. It is defined as a crime against fauna in Spain’s Penal Code (Código Penal) and is also an administrative infraction under regional legislation, though it still enjoys a high degree of impunity.

From 2010 to 2014, SEO/BirdLife coordinated the Life+ VENENO which aimed to reduce illegal use of poison in Spain. One of the goals of the project was to ensure that the powers-that-be have sufficient legal tools for preventing and prosecuting cases of poisoning.

Specific plans and protocols for the fight against illegal use of poison, wherever they have been approved and adopted, have always proved to be a big step towards solving this problem in Spain. An aim of Life+VENENO was to spread to other Spanish Autonomous Communities the progress made in those regions that were already running strategic anti-poison plans or strategies before the project was launched, namely Andalusia, Aragon and Castile-La Mancha. These legislative instruments comprise a series of minimum measures on the prevention, deterrence and prosecution of this crime; another aim is to shape and nurture a general public commitment against this threat to biodiversity. Life+ VENENO has drawn up a basic draft of the Action Plan for Eradication of the Illegal Use of Poison in the Countryside  and four protocols:

• Procedural protocol for dealing with cases of poisoning in wildlife rescue centres and toxicology laboratories.

• Procedural protocol for law enforcement officials in charge of collecting presumably poisoned fauna or bait and the preliminary investigation.

• General legal protocol for administrative action and liaison with criminal proceedings deriving from the use of poisoned bait in the countryside.

• Procedural protocol for law enforcement officials in charge of surveillance and preventive action against use of poison in the countryside.

Help was also given to ensure approval of other instruments such as the Regional Strategy of Castilla y León for the Integrated Fight against Illegal Use of Poisoned Bait in the Countryside and the Action Plans for the fight against Poison in Valencia (Comunidad Valenciana), Canary Islands and Catalonia. The latter take up practically all the draft measures proposed by Life+ VENENO. 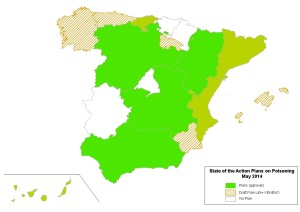 Fig. State of the Regional Action Plans on Poisoning in Spain. May 2014

Swingeing public-spending cuts in Spain delayed approval of the proposed plans and protocols. Nonetheless all 17 regional goverments have pledged themselves to the cause by signing agreements with Life+ VENENO, to enforce within their regions a progressive eradication of fauna poisoning. This represents the best guarantee of nationwide plans or strategies for fighting against poison, even exceeding the initial remit upon which the project was approved, involving at that time only eight regional goverments.